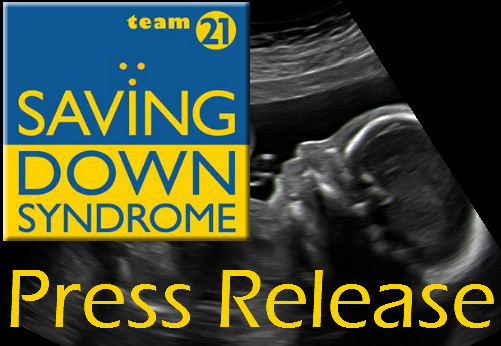 New UK Downs test should be deferred due to ethical concerns

An international social justice advocacy for people with Down syndrome is calling on the NHS to defer any decisions on the proposal to introduce a new pregnancy test for the condition until a full ethical review is carried out in accordance with international disability rights obligations.

“The NHS is proposing the implementation of the new cfDNA, or NIPT, test into the national screening programme.  The proposal is likely to have a significant negative impact on the Down syndrome community, including further reductions in births. However the NHS has failed to consider the ethical implications of the proposal on our community. This fails to meet the UK’s obligations under the United Nations Convention on the Rights of Persons with Disabilities (CRPD)”.

Mrs Murray explained that an area of particular concern is that people with Down syndrome have not been consulted on the proposal, despite the clear impact it will have on their basic human rights, and this being a specific requirement under the CRPD.

“We are particularly concerned that there is a discriminatory assumption that the reduction of miscarriages is positive (and it is) whilst an increased loss of Down syndrome pregnancies is not a concern, and would even seem to be an objective given the focus on increasing detection rates”, explained Mrs Murray.

Mrs Murray concluded that  “There are no positive health benefits being offered under the proposal. While we would welcome anything that improves the quality of care for pregnant women, introducing NIPT as part of a national screening programme to “improve performance” actually means that more unborn babies lives may be lost with no other health benefit”.

Click here for a copy of our submission on the NHS proposal.

Latests from the Saving Down Syndrome blog

"Down syndrome has to disappear from society", according to Hans Galjaard