PRESS RELEASE – Don’t screen us out 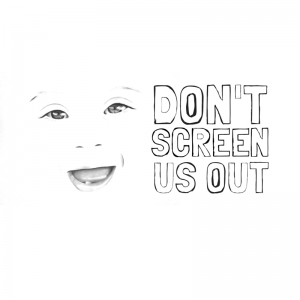 The number of babies with Down Syndrome aborted is set to to increase following a decision released this morning.

UK Down’s syndrome advocates have today launched the new campaign, Don’t Screen Us Out, after the UK National Screening Council (UKNSC) released its decision to recommend the implementation of a non-invasive prenatal testing (NIPT) technique called ‘cell-free DNA’ (cfDNA), which may lead to a profound reduction in the number of children born with Down’s syndrome.

Spokeswoman for the Don’t Screen Us Out campaign, Lynn Murray said:

The Don’t Screen Us Out campaign calls on the government to halt the implementation of cfDNA screening and to introduce reforms which would support those with Down’s syndrome and their families.

The release of the decision coincides with the recent release of a UN report from the International Bioethics Committee (IBC) of the United Nations Educational, Social, and Cultural Organisation (UNESCO) issuing a stern warning about the drive to adopt NIPT in national screening programmes, “the potential ethical disadvantages of NIPT can be summarised as routinisation and institutionalisation of the choice of not giving birth to an ill or disabled child”.

The Governmental enabling of such an approach, also violates the UK’s treaty obligations to the UN Convention on the Rights of Persons with Disabilities (CRPD) to make sure that its health policies – including antenatal screening – are informed by and reflective of a ‘social model’ understanding of disability. As indeed does the haphazard medical support for parents whose child is diagnosed with fetal disability, which leads to pressure on parents to abort their babies with disabilities such as trisomy 21 and causes the conditions that drive the low proportion of Down’s syndrome births. This constitutes a failure to implement section 23, subsection 3 of the CRPD for early and comprehensive support to families with children who have Down syndrome.

“Greater support is necessary for parents who are expecting a child with Down’s syndrome. For example, there is a lack of clarity in communicating the diagnosis or prognosis of fetal disability, and the presumption from many medical professionals that parents would opt for abortion. This is worsened by the fact that there is also limited information and support for the option of raising a baby with Down’s syndrome”.

The cfDNA test should not be implemented into the UK Fetal Anomaly Screening Programme at this stage. Given the state of the medical system as it currently exists, cfDNA may only worsen the culture of informally eugenic anti-disabled discrimination that exists in our screening programme health services.

Don’t Screen Us Out are urging members of the public to visit www.dontscreenusout.org and to use the site to contact their MP urging them to write to the Secretary of State for Health, Jeremy Hunt, asking that the government halts the introduction of second-line cfDNA screening.

For more information on Don’t Screen Us Out campaign, see our website www.dontscreenusout.org.