Indiana to address prenatal prejudice against Down syndrome 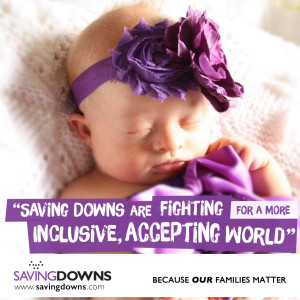 Senate Bill 334 (SB334) would prohibit abortions due to a diagnosis of Down syndrome and other prenatally identified disabilities.

House Bill 1093 (HB1093) would review information that health providers give to families after a diagnosis of Down syndrome and would not allow pregnancy termination to be presented “as a neutral or acceptable option.”

It would be to the disadvantage of people with Down syndrome if US abortion politics and the wider pro-choice v pro-life debate got in the way of the proposed laws. It needs to be recognised that abortion politics deals with questions around the right to life. SB334 deals with disability rights. Whereas people will differ on the question of the right to life and abortion, it also needs to be acknowledged that targeted selective abortion not only impacts on the unborn child and the parents, but it impacts on the survivors: those living with Down syndrome. It reinforces a cycle of prejudice against them, because it says: “your life is different and warrants detection for selective abortion” in a way that isn’t applied to those without the condition.

SB334 is the correct approach in terms of disability rights and is underpinned by the precedents of the United Nations (UN), the 2013 UK parliamentary inquiry on abortion and disability, and the current work of the Human Rights Commission in New Zealand.

SB334 is a stand-alone disability rights law to address prenatal prejudice and discrimination. Any other laws that impact on abortion rights would need to be passed through democratic state law. The proposal will stand on its own merit under democratic process.

The question of disability rights in relation to selective abortions for Down syndrome is becoming settled in the international arena. The proposed Indiana ban sits comfortably within this context.

In 2013 a UK parliamentary inquiry on abortion and disability determined that disability selective abortion breaches disability rights and has recommended the repeal of disability as a grounds for abortion in the UK.

In 2014, the New Zealand Human Rights Commission acknowledged that disability selective abortion breaches disability rights. The Commission has launched a two-year project to address this issue and report back to the UN committee responsible for the Convention on the Rights of People with Disabilities (CRPD). The Disability Commissioner acknowledged that advocates in New Zealand have successfully disentangled confusion between the disability rights debate and the right to life debate. The outcomes of this project are expected to be taken forward into the international arena by other countries that are signatories to the CRPD, including the US.

The UN committee responsible for the CRPD has recently made statements that disability selective abortions offend disability rights and the Convention. The committee has ruled that laws that provide for abortion on the grounds of disability breach the CRPD if they provide a lower level of legal protection before birth than others solely due to a prenatal diagnosis of a condition such as Down syndrome. Targeted selective abortion for Down syndrome firmly sits outside that understanding.

SB334 deals with a situation where a woman wants to be pregnant and then doesn’t want to continue the pregnancy because of her baby’s diagnosis of Down syndrome. The principle of non-discrimination requires that an “otherwise wanted” unborn child should be free to be born without discrimination on the basis of their disability. The emergent disability rights view is that prenatal prejudice against conditions such as Down syndrome are impermissible under the basic principles of human rights and international law. SB334 comfortably sits within this understanding.

HB1093 would review information that health providers give to families after a diagnosis of Down syndrome and would not allow pregnancy termination to be presented “as a neutral or acceptable option.” It is based on Chloe’s Law in Pennsylvania and adds one sentence from the 2014 Louisiana law to prohibit prenatal discrimination. The Louisiana law was passed unanimously in the House and Senate with full bipartisan support. We have previously discussed that the Louisiana approach is spot on. Presenting abortion as an option lowers the dignity of the child, their parents and those living with Down syndrome. Those with Down syndrome have the right to be born free from discrimination just like everyone else.

Both bills are welcomed, as they are the correct approaches from a disability rights perspective. They uphold the principles of non-discrimination and equal treatment under the law for those with Down syndrome.

We look forward to the successful passage of these laws and for other American states to show similar leadership in addressing prenatal prejudice against the Down syndrome community.