Myth 3. Genetic screening is not about money, but our well-being. 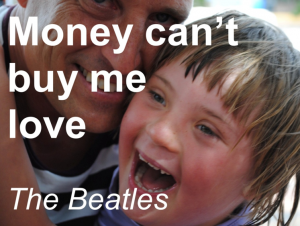 Fact: Screening negatively affects the lives of people currently living with Down syndrome.

Even though Down syndrome does not cause inhumane suffering  (Myth 1), prenatal screening and selection won’t lead women to a greater reproductive freedom (debunked Myth 2) but instead increases pressure upon them, the prenatal genetic screening business is in full swing. What is driving this new genetic technology? Why did it so rapidly become the new ‘norm’ in routine prenatal healthcare globally?

The answer is simple: money.

In 2014 Belgian media reported, in a series of articles, on the plan by the Belgian Minister of Health to implement the NIPS (non invasive prenatal screening) as part of the publicly funded national screening program making it available to all pregnant women. Other countries (UK, The Netherlands, etc.) are considering similar scenarios.

Possibly an extra $630,000 is spend by public funded healthcare per prenatally diagnosed child with Down syndrome

Down syndrome, as the most common chromosomal variation, occurs approximately in 1 in 700 pregnancies. The costs of NIPS vary per country and region, but for calculation purposes an average of $900 per test is used, which means some governments are considering to fork out an extra $630,00 (700 times $900) per diagnosed child with Down syndrome to enable selection. In Belgium approximately 65,000 children are born yearly. If all these women choose screening, extra costs for the Belgian government amounts to nearly $60 million. Every year.

Besides having moral, social and ethical objections to this, from an economical perspective, is money spent wisely? A study from Norway finds a link between abortion and subsequent depression). According to Sølvi Marie Risøy, a researcher at the University of Bergen, selective abortion can “bring women at the limit of what a person can bear”.

This is not in the best interest of women nor something that usually comes up during counseling. Treatment for these women, loss of income, will greatly add to the long-term costs for society. If these millions would be invested in programs aimed at helping people with genetic differences (like Down syndrome) and their families, this would benefit everyone in society. Think of inclusive education for children with learning disabilities or creating more job and housing opportunities for adults.

In Asia, Europe and the Americas combined there are over a hundred million pregnancies yearly.  With an average cost of $900 per test, potential profits for the pharmaceutical industry developing dna-tests are huge:

“Looking forward, the market for prenatal and newborn genetic testing is projected to be worth USD 8.37 billion by the end of 2019, growing at a compounded annual growth rate (CAGR) of 26.9%.”

(For the latest news on revenues, shares and other financial tidbits on tests check out #NIPT).

Pharmaceutical industry slickly markets ‘peace of mind’ to expectant parents to sell their product and maximize profits. It is not surprising they have managed to distort a test aimed at eliminating a portion of society into a promise of life in ‘Harmony’. I can see expecting parents –only wanting the best for their child- swallowing the false promise of a perfect life based only on genetic information.

What I don’t understand is that so-called medical ‘experts’ and governments are so willing to pour millions into genetic screening programs that offer no health benefits but target people who are perfectly happy with their lives under the false pretence of ‘public health’.

We have to resist the fear that is cultivated by medical professionals, politicians and the pharmaceutical industry, to give birth to an ‘imperfect’ child. Down syndrome is not a ‘scary condition’ that causes suffering. The real danger are voices that claim our children need to be tested before we can decide ‘to start life’. It lies in a society that ‘cares’ less and exerts more pressure in our wombs.

Screening and selection doesn’t say anything about life with Down syndrome. It says everything about the society that we are.